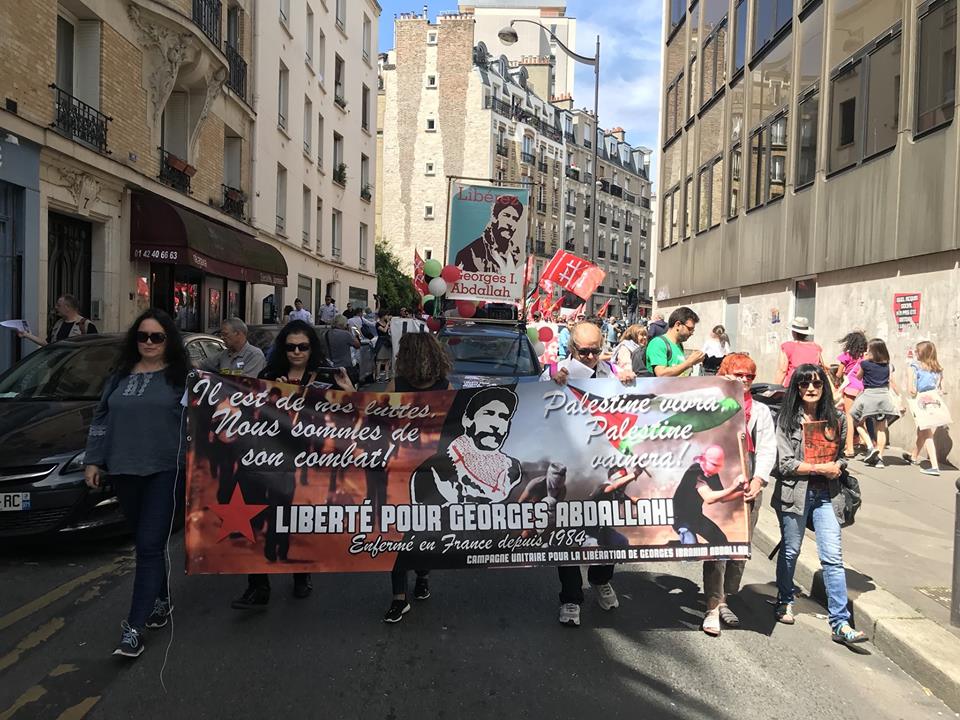 On 23 June, activists in Paris marched to demand the liberation of Georges Ibrahim Abdallah, the Lebanese Communist struggler for Palestine imprisoned in France for over 33 years. 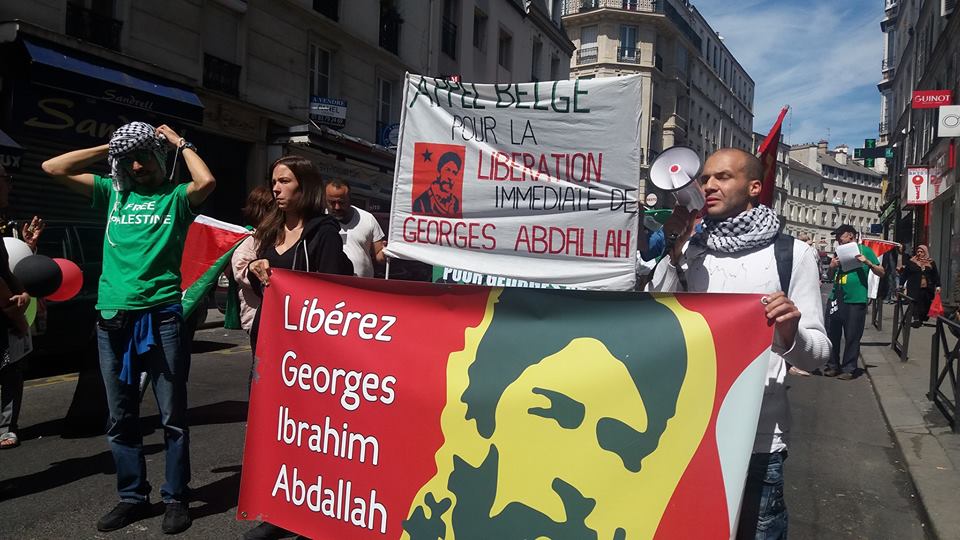 Organized by the Unified Campaign to Free Georges Abdallah, a number of organizations, including the Campagne BDS France, Secours Rouge, Plate-forme Charleroi-Palestine, Secours Rouge, Jeunes Revolutionnaires, CAPJPO-EuroPalestine, Parti Communiste Maoiste and many others, joined the march through the streets of Paris. 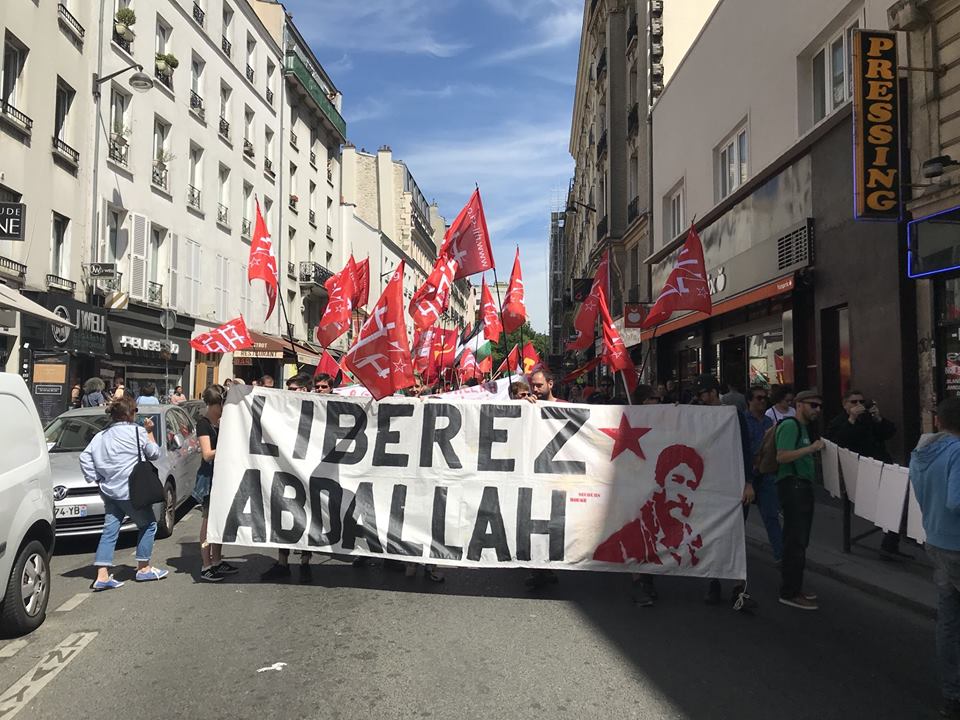 A group from Belgium, organized by Plate-form Charleroi-Palestine and the Belgian Appeal for the Freedom of Georges Abdallah, also travelled to attend the protest.

The event included a special presentation of a letter by Georges Abdallah from Lannemezan Prison to those struggling for his freedom in the demonstration. 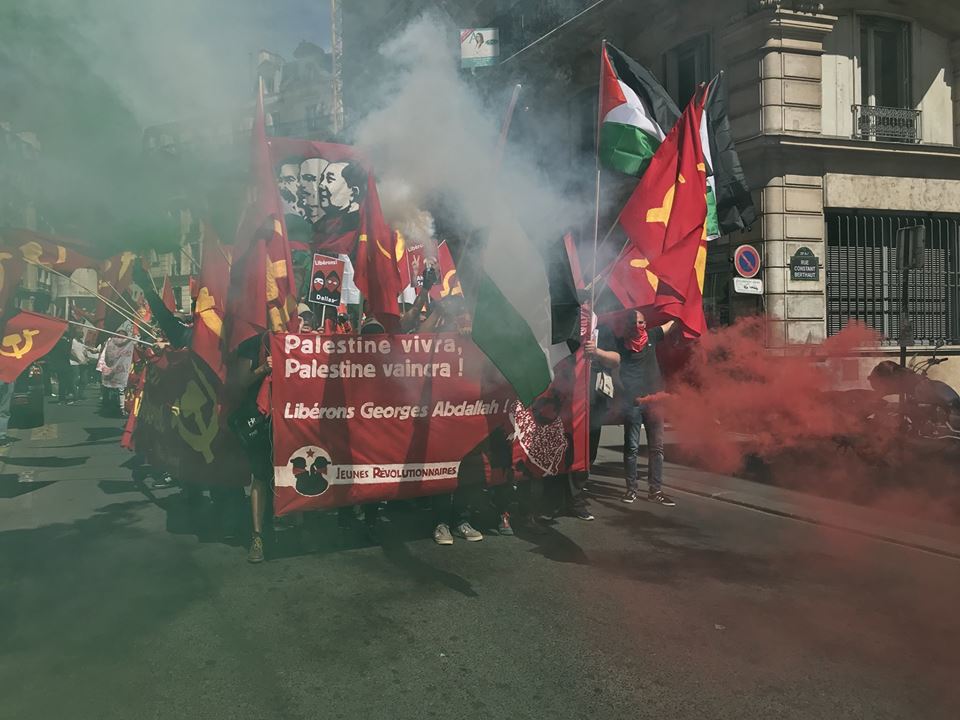 You know, when you are in these sinister places for a “small eternity”, you are overwhelmed by a considerable emotion during the solidarity initiatives … That being so, I send you all my warmest greetings at the beginning of this short speech …

In this time of great struggles, Comrades, your gathering today in Paris fills me by strength, warms my heart and especially strengthens me in the conviction that it is only by assuming more and more the ground of the anti-capitalist and anti-imperialist struggle that we bring the most powerful support to those who have resisted for decades behind these abominable walls.

Certainly Comrades, it is not by seeking judicial tricks here and there that we manage to face the criminal persecution of “the capital of capital” to which the resistance is held in captivity, but rather in affirming unswerving determination in the struggle against their moribund, criminal system. We all know that, in the end, it is according to the balance of power that we can succeed in tearing our comrades from the clutches of the enemy. The latter only agrees to let go when he realizes that keeping these revolutionary strugglers in captivity carries a greater weight in the process of the ongoing struggle than the threat inherent in their release. It is not a matter of pretending that we do not know that justice is always a class justice in the service of a class policy inscribed in the global dynamics of a class war, nationally and internationally. Admittedly, there are social gains that allow us to wage battles on the legal ground and it is useless to recall that we must carry out these battles. It does not remain so, Comrades; there comes a time when one must realize that the so-called “reason of the State” always means that the bourgeoisie suppresses its own laws when their interests seem to require it. That said, any approach that might suggest that one has interest in pretending is downright counterproductive, even if it is animated with all good intentions. Certainly, after so many years of captivity, there are and will always be in our ranks friends and comrades who are calling for something to be done in the courts, and perhaps this times, etc, etc …

Of course Comrades, it is not good intentions that are missing. In spite of all the suffering of lengthy captivity, there is not and there will be no possibility of escaping what is needed – the effort necessary to change the balance of power, if one longs for (as say some of my relatives) the release of our comrades. Let’s develop solidarity by always assuming the ground of the anti-capitalist and anti-imperialist struggle and “our old friend …” this “old mole who knows underground work so well” will not be indifferent to our efforts. This is precisely why, Comrades, it is of paramount importance to know and to be able to make clear this approach to solidarity in the global dynamics of the ongoing struggles.

The crisis of moribund capitalism in its phase of advanced putrefaction is already there before our eyes at the global level, in the centers of the system as in its peripheries … What is happening these days in the Arab world in general, and in Palestine in particular (Yemen, Bahrain, Syria and Libya too …), is more than emblematic in this respect. Imperialist forces of all stripes are engaged in a multi-dimensional war, reflecting inter-imperialist contradictions on the one hand and an imperialist war of looting and destruction on the other. The majority of the Arab bourgeoisie has opted for this camp … on the other hand, Palestine on a daily basis gives us all the lessons of sacrifice and courage of exceptional scope. More than ever, the Palestinian popular masses, in spite of all the treachery of the bourgeoisie, assume their role as the true guarantor of the defense of the interests of the people. Young and old martyrs fall by the hundreds, even as they march unarmed. Yet the imperialists of all kinds do not take offense at their friend Bibi, the distinguished guest of the Elysee.

Palestine remains nonetheless, despite the treachery of the bourgeoisie or not, despite direct or indirect imperialist interventions. The Resistance continues and certainly it will continue as long as the occupation continues. Naturally, the Palestinian popular masses and their fighting vanguard in captivity must rely more than ever on your active solidarity.

May a thousand solidarity initiatives flourish in support of Palestine and its promising Resistance.

Solidarity, all solidarity with the Resistance in Zionist jails, and in isolation cells in Morocco, Turkey, Greece, the Philippines and elsewhere in the world!

Solidarity, all solidarity with the young proletarians of the working class neighborhoods!

Solidarity, all solidarity with the railway workers and other proletarians in struggle!

Honor to the Martyrs and the popular masses in struggle!

Down with imperialism and its Zionist watchdogs and other Arab reactionaries!

Capitalism is nothing but barbarism, honor to all those who oppose it in the diversity of their expressions!

Together Comrades, and only together will we win!

To all of you Comrades and friends, my warmest revolutionary greetings.

* highlighted in red by the author