On February 1, 2019, officers of the FSB, the Russian state security apparatus descended from the KGB, arrested a dozen people in the latest wave of their campaign of repression against accused anarchists throughout the country. After brutally torturing them over the following 24 hours in order to force them to agree to incriminating statements, they released 11 of them. The twelfth arrestee, Azat Miftakhov, temporarily disappeared within the legal system while the FSB continued torturing him and refusing his lawyer access to him. This is just the latest in a series of events in which the FSB have systematically employed torture to force arrestees to sign false confessions in order to fabricate “terrorist conspiracies” involving activists. This pattern will continue until people put enough pressure on the Russian government to discourage it from disappearing and torturing young people—or else, if this does not occur, until the secret police serving other governments, emboldened by the successes of the FSB, escalate their own use of torture and fabricated “conspiracies” to suppress activism in other countries as well.

The latest innovation of the FSB is to torture arrestees into making false statements to state media channels as well as police. After FSB agents tortured him with electroshock for two hours in the back of a car, arrestee Daniel Galkin was dragged before a reporter from the state television “First Channel” (Perviy Canal) and ordered to make statements discrediting the anarchist movement. All this is familiar from the methods that the state used against dissident communists in the 1930s under Stalin. Upon his release, Galkin made a public statement about the torture to which he was subjected and the methods the FSB used to terrorize him.

“I will speak, I will express what happened however I can, through all possible means and resources, I will do everything I can to tell people. I sleep very badly. I sleep and it seems to me that they will come after me, knock the door down and take me somewhere to the forest, because in Russia this is done to people, to activists.”

Azat Miftakhov is a graduate student of the Faculty of Mechanics and Mathematics of Moscow State University, where his colleagues have signed an open letter of support for him, reproduced below. Extensive reporting on these events, including interviews with several of the tortured arrestees, is available here in Russian. For more background on the torture cases in Russia, read the full report we published last year. To keep up with Russian solidarity organizing around these cases, visit rupression.com.

This text reached us from Russian comrades who coordinate legal support and solidarity for anarchists targeted by the FSB.

On February 1, in Moscow, the Russian FSB raided several flats and arrested 10 people on charges of “conspiracy.” All of them were released after day-long interrogation and physical torture, except one person, Azat Miftakhov. He is accused of “fabricating explosives” and being a member of a “radical anarchist organization Narodnaya Samooborona” (Peoples’ Self-Defense). Over the past year, this organization has become the main target of police repression in Russia: several accused members of the group have been arrested, tortured, or threatened. Some had to leave the country under threat of long prison terms and torture.

One of the arrested anarchists, Daniil Galkin, has reported about the torture. After his arrest, he was beaten and tortured with electroshock in the police car for two or three hours. Under torture, Galkin was forced to say that Azat Miftakhov was an anarcho-communist and took part in anarchist actions. Galkin was forced to give an interview that was compromising anarchists to a federal TV-channel “First Channel” (Perviy Canal), and to promise to “collaborate with the police by providing information about anarchist actions.”

In the police station of Balashiha in the Moscow region, Galkin saw Azat: he was threatened by the FSB officers, and his arms were wringed. According to Galkin, Azat “did not look like a human being” as a consequence of the torture. He also said he heard the screams of one of the arrested women activists, who was kept in the room next to his. He also heard that one of the arrested anarchists had cut his veins and taken pills in order to avoid further torture in hopes of not giving any information about other comrades. According to other witnesses and journalists, that person was Azat Miftakhov.

Azat was kept in detention in that police station until late at night; he was not permitted to see his lawyer. At night, he was dragged out of the police station right past his lawyer, who had been waiting for him, and conducted in an unknown direction. We do not know anything about his actual location, as of February 2 at 6 pm. We think he’s still being tortured and forced to give information about his comrades and himself.

We ask for solidarity actions, the spreading of this news, and financial support.

In order to donate to the legal defense of Azat Miftakhov and other Russian activists:

An Open Letter in Support of Mathematician Azat Miftakhov

The following text was published in Russian and English here.

Considering different sources, on February 1, 2019, Azat Miftakhov, postgraduate of the Faculty of Mechanics and Mathematics of Moscow State University, was detained on suspicion of manufacturing explosives. He was tortured by the police and Russian Security Service; according to the words of Daniil Galkin, who was detained together with Azat, “he no longer looked like a human being.” Torture had been used to obtain testimony against Miftakhov. Security forces are concealing Miftakhov’s location from his lawyer Svetlana Sidorkina. At the time of this publication, she was not admitted to her client. Consequently, according to information from the lawyer and other detainees, Azat tried to cut his veins.

We, the undersigned representatives of the mathematical community and others in solidarity with them, are extremely concerned about the current situation. We demand that the authorities report the location of mathematician Azat Miftakhov and his health status immediately, and admit the lawyer to see him. We also demand that they stop torturing Miftakhov and the other detainees, and we call for a transparent and fair trial.

Update: Azat Mivtahov has been found in the police station in Balashikha, Moscow region. The investigator claims he was arrested only at 19:10 pm on February, 2. Azat and his lawyer confirmed the use of torture. 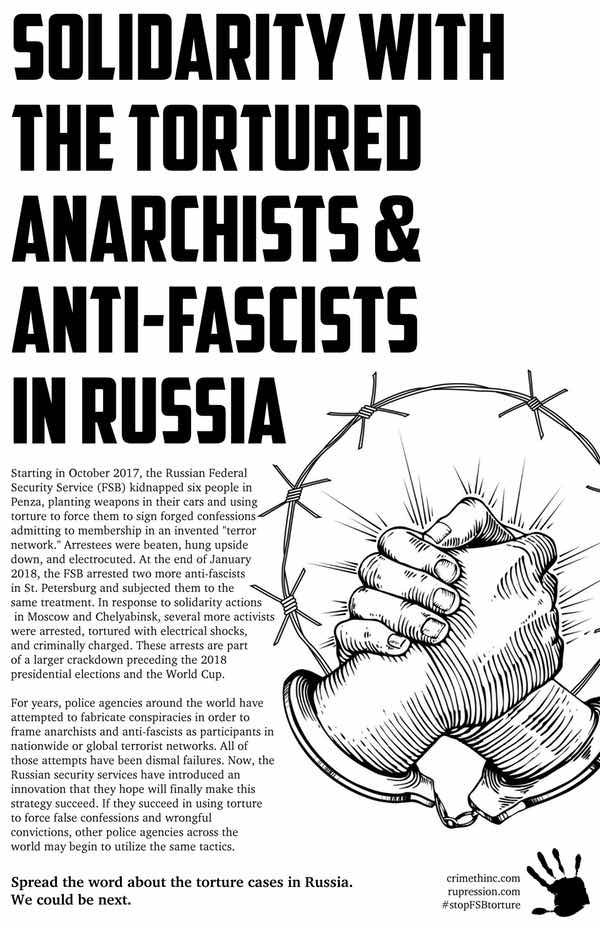