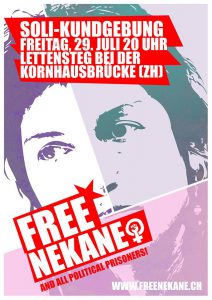 2. Was in Deutschland geschieht

Q. How can the anarchist/antiauthoritarian space change from being reactive into a real revolutionary movement? In your opinion, what political characteristics should it have, and what kind of organization and aims?

A: It is a question of political positions. Anarchy, or Libertarian or antiauthoritarian communism is a social proposal and organization. The condition to create a truly revolutionary anarchist movement is the existence of political positions and proposals in order to make clear to the people, the masses and workers, what we believe and what aims we have as anarchists. This means that we must take positions on the burning problems and issues of our time that are the result of the capitalist crisis- such as debt, memoranda, the dilemma of staying in or leaving the European Union, and to make clear what is our goal as anarchists, which is none other than the overthrow and destruction of capital and the state and the creation of a stateless, classless society.
These are issues for which the masses of people, the people affected by the crisis and the policies for rescuing the system, have searched and still search answers, yet the anarchist/anti-authoritarian space had nothing different to offer them compared to the proposals of the mainstream parties (besides slogans perhaps). Also beyond the formulation of political positions and proposals it should be clear by whom or in what ways and means our struggle will promote and implement these political positions and proposals- in other words, how we will make Anarchy a reality.

So if we want to make revolution and overthrow capital and the state and to create a revolutionary movement aimed at this stateless and classless society, then we must necessarily have armed struggle in our practice as a means of struggle. Because as I said in my presentation it is obvious and a given that no revolutionary perspective is possible without armed struggle.
Of course a revolutionary movement must have diverse methods of struggle, it must have all the different methods as so many arrows in its quiver: propaganda, counter-information, demonstrations, self-organized structures, and there must be open and public, as well as illegal actions.
But all these actions must be part of a larger package that serves the same purpose, the overthrow of the regime. For this it is indispensable to have the greatest possible agreement among comrades on unified political positions and proposals, in a kind of political program. Otherwise we simply reproduce the characteristics of the current movement, which is a patchwork of groups and individuals, which is neither a unifying nor a united force and where all have different priorities, and therefore it remains a purely reactive political space, only for protest or at best insurrection, but it can not become a threat to the regime nor have a revolutionary perspective.
Regarding the organization that a revolutionary movement must have, it depends on the political positions and proposals we have. Since it seems today that nothing can be taken for granted, if we are anarchists, we are supposed to aim for the immediate abolition of the state as a mechanism to administer societal affairs and the destruction of capital. If our positions and our goals are the destruction of capitalism, the market economy and the state, leading to the creation of a stateless and classless society- that is, a confederal organization where the societal units are the communities, communes and collectives where the decisions are taken by assemblies of the people who make up these social organizations- then the organization of the anarchist revolutionary movement is quite obviously federal.
Because our organizational set-up is our social proposal in miniature, it is Anarchy in miniature. In such a case, anarchists already within their organizations do act as a microcosm of what they profess and support. Inside the old is born the new, but not by reproducing the old hierarchical structures and values of the world and society we want to change. This is very important, because previous revolutions in fact failed in their objectives because they reproduced these hierarchical values and structures in a slightly different way.

True communism means a society without a state. The difference between Marxists and anarchists is that in the process leading to communism, Marxists believe that there should exist in the transition from capitalism to communism, the so-called “workers state” or “dictatorship of the proletariat” and that later, when the conditions have matured and the class enemy is defeated, the state will simply dissolve itself. Whereas, in contrast, anarchists believe that the state must be dissolved and destroyed immediately without any transition. Historical experience has shown that no state dissolves itself, various pretexts are given for its preservation, and that no privileged caste resigns its privileges and gives up its power in the management of human affairs.
As shown in the example of the Russian Revolution of 1917-21, instead of the assumed self-dissolution of the state, there was created the most authoritarian and totalitarian state, and this was a bad example for the labor movement and anti-imperialist struggles and revolutions in the Third World, which reproduced regimes that imposed full nationalization of the economy, along with the dictatorship of a bureaucracy that reproduced class divisions.

In the case of anarchists in the example of Spain, they proved what Saint-Just said in the French Revolution, that “those who make revolutions halfway only dig their own grave”. The Spanish anarchists- and they achieved major gains in terms of self-management in most of the Spanish territory where, thanks to their efforts, the Franco coup was suppressed- did not topple the two governments, both the local one of Catalonia and the central government in Madrid of the Popular Front, all in the name the anti-fascist struggle, with this resulting in constant concessions and repression of self-management by the Communist-controlled government.
Future revolutions must not repeat past mistakes, and must dissolve the State directly as a mechanism of class-rule. We must promote this today as anarchists and we must show our political positions as a movement.

In February comrade Roupa attempted to help your getaway from the prison of Korydallos by [hijacking a] helicopter. Could you make a comment about this?

It was an action forming part of the framework of the continuation of action that Revolutionary Struggle has engaged in since 2009 at the beginning of the crisis, targeting the mechanisms and economic power structures that play a significant role in the crisis and its political representatives (Athens Stock Exchange, Eurobank, Citibank) and continued with the last attack of the organization in 2014 on the Directorate of the Bank of Greece and the IMF permanent representative office, for which I was recently sentenced to life imprisonment.

This escape attempt was a response to repression against Revolutionary Struggle and against other armed fighters, and in this context included in the escape were members of the CCF.
Despite the failure of this attempt, it is of great political value and importance.

As Revolutionary Struggle, we have made choices that have brought us face to face with state repression, prison, and we have risked our lives in this combat. For us, prison is a terrain of struggle, not the end of the fight, and we have proved that it was not the end with the arrests in 2010. To defend with pride what we are, and to continue the armed struggle is a duty and right, and it is our especial duty towards Lambros Fountas, our comrade who was killed in action, it is a matter of course for us and negates the repression.
Such actions as comrade Pola Roupa attempted are exemplary because they give a strong political message that we are and remain consequent, despite successive repressive operations of the state against us, despite the arrests, heavy sentences, and murder of Lambros Fountas, we are unrepentant and we will not stop struggling, we will never throw in the towel, we will never give up the fight.
Also the fact that the escape would have included members of CCF demonstrates further that there is not so much importance in different positions about issues concerning the struggle, but that what matters is the common goal, the struggle against authority, the struggle for the overthrow of capital and the state.

In my estimation, this is a result of the general political failure, or if you like, the political defeat of the anarchist/anti-authoritarian space over the last six years where, first of all, it was not up to the historic occasion, it could not intervene as a catalyst in the period after the inclusion of the country in the programs of international organizations of the Troika, and secondly, due to the fact that the terrorism of the state started to bite, with the waves of repeated arrests for armed action the 2009-2011 period, a result that brought into prison dozens of comrades who have been sentenced to many years of prison, and that there exists the perspective that they will remain fairly long years in prison.
On the issue of solidarity there were simultaneous problems of separations, with criteria as to why someone was accused and what attitude they held, that is if they were “guilty” or “innocent”, if they took responsibility for participation in an armed organization or invoked a judicial “fabrication”. There were criteria of “solidarity” based on personal or family relationships, or the criteria that, “anyone I disagree with, I am not in solidarity with”.
In recent years we have witnessed many such separations using various criteria. All these divisions have basically a political background behind them, such as the exclusion of armed action as part of the fight against state and capital.
So a piece of the anarchist space has proven to be easier to mobilize on issues of “human rights” since they are considered more popularizable, with the issue of judicial “fabrications”, “unjust persecutions”, “construction of cases”, all this rather than of course the armed struggle cases for which the vast majority of the political prisoners are in prison, and many of whom have accepted political responsibility for their participation in armed groups.
But now there is a general indifference and a general deficit in solidarity towards all political prisoners, not just for one portion, and is irrespective of divisions and regardless of any controversy, and this is due to the political defeat of the anarchist/antiauthoritarian space in recent years. This defeat is the result of serious political shortcomings and incapacities, that it has no coherent political positions and proposals to the problems of our time, the crisis and policies to oppose it. So it could not intervene in the period of big mobilizations against the 1st Memorandum in 2010-12 and was unable to develop into a serious political pole, a revolutionary movement that would be a threat to the regime.

This general political defeat affects the overall activity of the movement and has led to the present resignation and fragmentation- particularly visible in the last rallies against the 3rd Memorandum- and of course this too affects the question of solidarity with political prisoners. Naturally, the movement is also influenced by the general social defeat, after the mobilizations against the memoranda and rescue programs implemented over the past six years have all been defeated. From 2012 there has been a decline in social resistance and a lessening of mobilizations made against the governments of Samaras and of SYRIZA.

The overall political failure and defeat of the anarchist/anti-authoritarian space to develop into a revolutionary movement that has the potential for subversion and revolution is the cause of the deficit in solidarity with all the political prisoners, and not just for those that might be said to have responsibilities for various confrontations between prisoners, and which in some degree are caused between views of “innocence” and “guilt” and the issue of assumption of political responsibility.

To sum up, the problem of the anarchist space is an existential political one. It has forgotten about the war against authority, and therefore has forgotten its own prisoners of war.