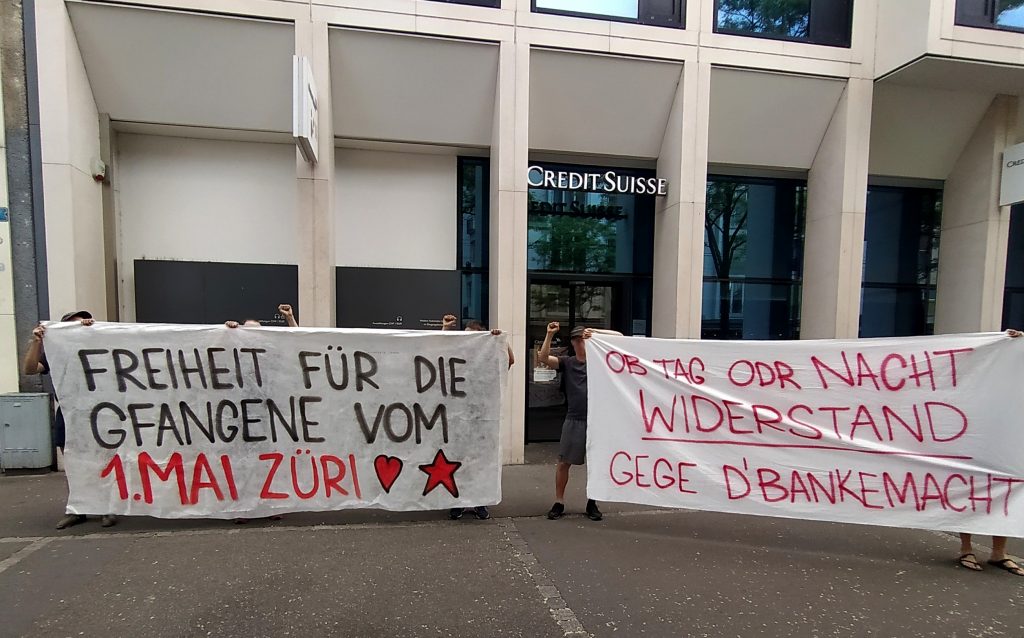 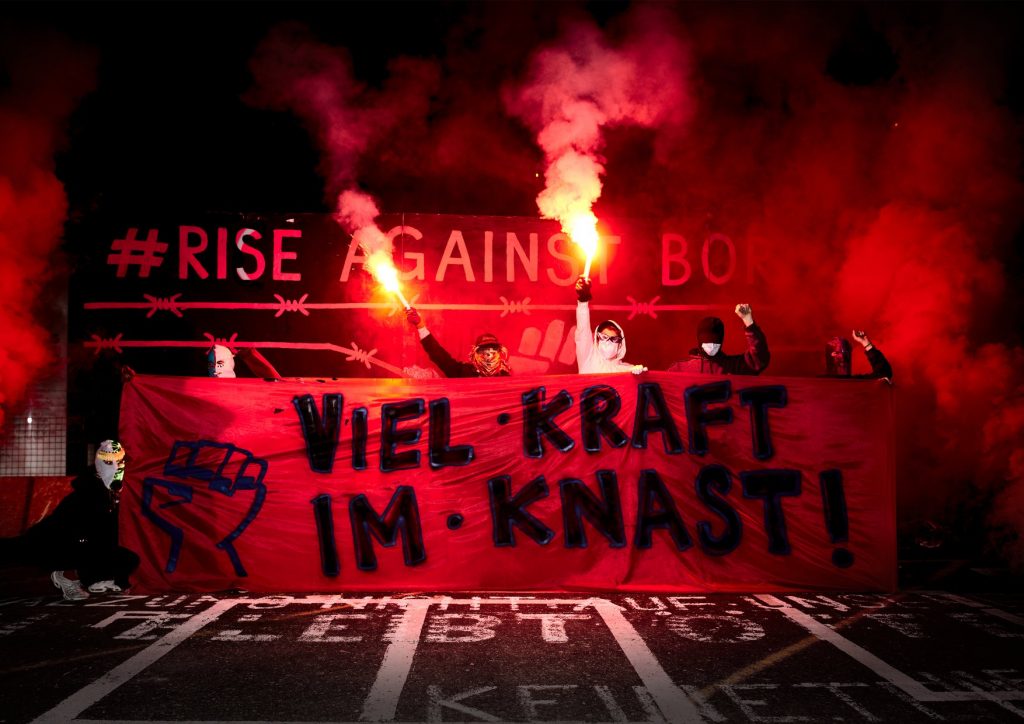 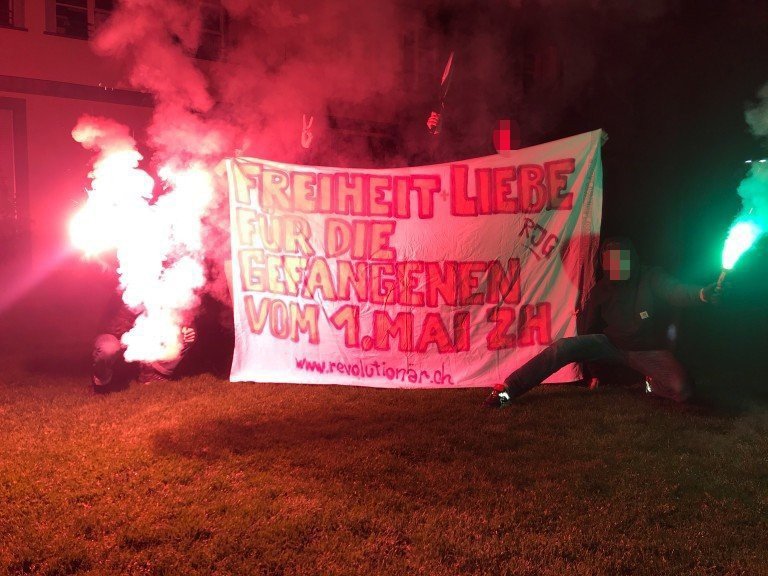 Text by Nikos Maziotis, member of Revolutionary Struggle for the event organized by the International Red Help for the first of May

The events of May 1886 that took place in Chicago are a turning point in the history of the revolutionary labor movement. It was not only the fight of the workers to reduce working hours to eight hours daily that featured in this fight and led to the global fight of the proletariat for an 8 hour work day, but it was also a response of the workers to the crackdown of bosses, and the murder of workers at the McCormick factory.

This response was “Workers in arms” which called for a reaction of the working class to the killings of the bosses. It was the armed reaction of the workers when police ordered the dissolution of the Hay Market Square protest that was called against the killings of the strikers at the McCormick factory. The armed tradition of the working class and revolutionary movement was at that time closely related to unionism and the struggle for an 8 hour work day, better working conditions, wage increases, social security. And all this was seen to some extent, as a stage on the way to the abolishment of the capitalist system. Such struggles, which were inspired by the events of May 1886 in Chicago erupted in many countries over the next years in France, in Italy, Spain, Russia, Mexico, Argentina and they were characterized by the use of armed violence on the part of workers.

Unfortunately a large part of the labor movement adopted an approach that considered armed practices as “provocation” and practices of? “individual terrorism” that harm the labor movement and were therefore condemnable. There is the view, for example, that the events of the Hay Market Square with the throwing of? a bomb and the armed scuffle against the police that followed were an intentional provocation to justify the murder of several of the assembled workers, but also the conviction and execution by hanging of the organizer of the Hay Market Square protest.

The events of May 1886 in Chicago became an annual anniversary in later years to remind the world working class of the beginning of the struggle for an 8 hour work day and the sacrifice of those who gave their blood for this fight. It eventually developed into a painless celebration for compromised and sold off reformist unions that distorted the meaning of the events in May 1886, because what was sought after was the empowerment of the capital and also to continue to have/ also keep/maintain? the privileges of the middleman in the sale of the worker’s labor to the capitalists. Especially after the Second World War unions played a crucial role in the class compromise between the working class and the capital holders in order to revive capitalism from the ruins the war left behind it and to jump start get the engine of accumulation. They also played a crucial role in the enforcement of the social democratic and Keynesian model of management that is characterized by state intervention and the welfare state. They also played a leading role in the defeat of the working class from the 1970s onwards, when they adopted a defensive approach to the attack of the capital in the form of liberal Reforms that were brought in to overcome the inflation crisis by means of obliterating and taking back all the gains of the working class that had been gained over the previous period.

Today capitalism in response to the crisis we are experiencing and which erupted in 2007 – 2008 has unleashed an unprecedented attack even on the people of developed countries of the capitalist center in the US, and the EU. This attack turns people back to living conditions of the 19th century and the boundaries between the so-called Third World and developed countries of the capitalist center become increasingly blurred. So today, the struggle for the overthrow of the capital and the state, the struggle for revolution have become more timely than ever. If we want to honor the struggles of the Chicago innovator workers in 1886, then we should continue and develop the struggle for the overthrow of both capital and state. Under the current conditions, away from the illusion of trade unionism and parliamentarism of bourgeois democracy, the struggle must be conducted outside institutions, trade unions, political parties and it must be founded on the social base, the poor, the workers, the youth, the semi-employed the unemployed, the immigrants, the metropolitan proletariat. The conditions have changed since the days of primitive industrial accumulation.

Capitalism today because of the global economic crisis does not need armies of unskilled workers as it did in the 19th century. Instead due to the inability of reproduction of the capital, because of the inability of capital accumulation the system throws more and more workers to the street, outside/out of the labor market because they are no longer necessary to them. Because of the crisis and the policies pursued in countries like Greece with agendas imposed by the IMF, the ECB, the European Commission there is a fierce class war stemming from the capital with financial means and methods, a class war that as Revolutionary Struggle has said consists of a social policy of genocide and liquidation of the surplus population in Greece that has caused thousands of deaths/ murders, suicides, deaths from poverty, illnesses, shortages of basic goods. The crisis and the capital’s incapacity to reproduce has unleashed -particularly in countries affected by the debt crisis like Greece- a massive social robbery for the redistribution of social wealth from the bottom to the top of the social hierarchy. Salaries and pensions are cut, millions of people have been laid off, businesses close due to debts, thousands of homes and businesses are seized by banks due debts and are auctioned. The transnational elite in order to cover their huge losses and depreciation of their capital proceeds have gone to violent robbery of peoples and the social base. This is what has been happening in Greece at least over the last five years. Today a struggle for an 8 hour work day, like the one of the workers of Chicago in 1886 makes no sense at a time when capitalism is in crisis and does not need armies of unskilled workers as it did in the 19th century and up to the mid-20th century.

The legacy of the struggle of Chicago workers is no longer the demand for an 8 hour day or improving our way of life, since the crisis has rendered capitalism unable to do but to fight to overthrow capitalism and the state without a mechanism of class domination. This is not a time for reform. Under the present conditions it is impossible to hope for any reformist policy. Overthrow and revolution is the only realistic solution to the crisis. A revolution cannot be limited to one country. In Greece, despite the favorable objective conditions for a revolutionary attempt, ie. the economic crisis, the political crisis and the depreciation of the parliamentary parties, what was lacking was the objective factor, ie. A revolutionary movement to take advantage of these favorable conditions.

As a result, on the one hand we have the rise of the parliamentary far-right, neo-Nazi party Golden Dawn that came was elected third party in 25th January elections, despite the persecution of the majority of its deputies accused of running a criminal organization after Pavlos Fissa’s assassination a year and half ago, and on the other hand the rise of the center-left party SYRIZA that won the elections and took over both the government and the management of the capitalist crisis substantially accepting the agreement of the euro group on the 23 February, the payment of the debt, the agreements made during the previous period and the Troika of the IMF, the ECB and the European Commission and their assessment of the Greek economy.

Due to the debt crisis, Greece is currently the weak link in the Eurozone and the EU. Although it accounts for 1.9% of EU GDP, potential action on the part of Greece that would lead to denial and total debt cancellation, to the withdrawal from the Eurozone and further to exit from the EU with a break from the market economy and capitalism would create serious tremors not only in the EU but also in building of a global economy, since due to globalization there is a complete interdependence of system functions. But Greece is a country in the periphery of the EU region and not part of the capitalist center.

A revolution in Greece, a regional EU country could be the beginning of the destruction of the EU structure, although there is the risk of extreme right euro-skeptics forces that are on the rise now and are pushing for the return to the status of the nation state, the restoration of national sovereignty and therefore the defunct rivalries between nation states.

Revolutionary Struggle believe that a revolution in Greece could be an example, the beginning of a social revolution. Marx was proven wrong in his prediction that coming revolutions of his time would break out in developed industrial countries. Instead revolutions broke out in underdeveloped countries like Russia and Spain. Today in these times of crisis of the system that is the most serious of all the foregoing, it is more imperative to hit the heart of the beast, the capitalist center. Revolutions should break out in countries of the capitalist center, in developed countries, the US and the EU, where the headquarters of the transnational elite are in the City of London, in Paris where the annex of the IMF in Europe is, in Brussels where the center of the EU and NATO are located, in Frankfurt that is the center of the ECB, in New York the capital of world capitalism and in Washington where the headquarters of the IMF are.

The legacy of the labor movement of the past, such as the workers of Chicago in 1886, is not to fight today to simply improve the conditions of our lives or to defend against the attack of the transnational elite that retracts all the conquests of the old labor movement such as the 8 hour day, social security, the welfare state with its whirlwind of neoliberalism. Its legacy is to attack. It consists of the proletarian counterattack and complete destruction of capitalism. Attack its very strongholds: the seats of the central banks and stock exchanges. Where decisions are made that affect the fortunes of billions of people around the globe. The seats of the World Bank, the IMF, the World Trade Organization. It is the proletarian counterattack in each country for the overthrow of the ruling classes, governments and states. And for this counterattack it is necessary to resort to arms and guerrilla warfare. In this counterattack it has become necessary to rethink the revolutionary movements in each country that will analyze the conditions and will select the action strategies and forms of struggle within a framework designed solely for social revolution both in individual countries and globally. Fight for a global social revolution. This is the legacy of the workers of Chicago in 1886.

HONOR TO THE DEAD WORKERS AT THE MC CORMICK FACTORY AND HAYMARKET SQUARE.

HONOR TO THE EXECUTED FIGHTERS AUGUST SPIES, ALBERT PARSONS, ADOLPH FISCHER, GEORGE ENGEL AND TO LOUIS LINGG WHO COMMITED SUICIDE A DAY BEFORE HIS SCHEDULED EXECUTION

HONOR TO THE THREE ANACHISTS STRUGGLERS WHO WHERE CONVICTED IN LIFETIME SENTENCES, SAMUEL FIELDEN, OSCAR NEEBE AND MICHAEL SCHWAB.

HONOR TO THE REVOLUTIONARIES AND STRUGGLES WORLWIDE