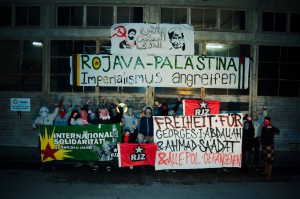 On Friday 17th, October there was a public political event held in the National Technical University of Athens, from the comrades of the Vox Social Center, on“Armed War, Revolutionary Movement and Social Revolution”, during which I was going to speak through the phone from Diavata prison, as a member of the anarchist organization Revolutionary Struggle.

This public political event intended to highlight the huge value of the armed struggle, as an inextricable part of the struggle for the overthrow of the capital and the state, its inseparable connection with the revolutionary movement, the necessity of the armed social revolution under the current conditions, when the system is still in crisis and is illegitimized in the eyes of the society and by the people’s majority. Let me remind that a similar public political event was held on October 9th from the comrades of Terra Incognita squat in the Aristotle University of Thessaloniki, where I had talked through the phone.

One day before the event in the National Technical University in Athens, one of the most known executioners of the Greek people, one of the most zealous submissives of the super-national elite and creditors and fans of the political and social genocide applied in order the capital system to be rescued and a parliamentary representative of the New Democracy, Adonis Georgiadis, asks for an intervention so as the event in the NTU where I was going to speak from the Diavata prison to be forbidden.

In fact, after a political intervention, an order was given to the direction of the Diavata prison and, in particular, to the director Stavropoulos and the warden Valsamis, so as the 8 telephones of the prison’s ground floor where I am detained, were to be switched off, in order for me not to be able to make a phone call and speak to the Athens NTU. The telephones of the prison’s ground floor were switched off from the midday opening of the prison, from 2.15 to 7.45 when the prison is locked for the night, illegally depriving the right of not only for me but for about 200 prisoners as well, to make a phone call. At first, the wardens claimed that the telephones were damaged. The same things were also claimed by the warden Valsamis to the 4-member prisoner’s delegation in which I took part too. In front of the prisoners I answered to him that he was lying and that the deprivation of the right to communicate is illegal. The warden’s response was to terrorize and put pressure on the prisoners not to come in touch with me and not to enter my cell because this is illegal.

This in not the first time that the warden Valsamis has called prisoners into his office in order to interrogate them on what they are talking about with me, or press them not to have any communication with me. At last, the warden Valsamis confessed to a representative of the Albanian prisoners of the ground floor with whom he had a private discussion in his office that he had an order to switch off all the telephones for three hours and he threatened at the same time that in case the prisoners kept protesting, he would put the MAT ([riot] unit for the rehabilitation of order) in prison.

At last, their “democracy” proves to be scared despite their claiming the opposite. Their democracy makes prophylactic policy movements of political censorship just as the fascists regimes do. Because, as Revolutionary Struggle has said, the current regime is a fascist one. We have lived for years in the fascism of Troika, of the International Monetary Fund, of the European Commission and of the European Central Bank. We live in the the fascism of the economical super-national elite. We live in the fascism of the Greek Quisling governments, which bow to the markets and the creditors of the super-national elite.

The regime has admitted at least two times to be afraid of the Revolutionary Struggle, it was once in 2010 when we were arrested one day before the signing of the first Memorandum, when they claimed that “A big terrorist attack will end the economy within a few hours” and now with the arrest of the anarchist comrade Antonis Stamboulos, when the Minister of Public Order stated that “The national effort for the termination of crisis for the country significantly requires the consolidation of a security environment, both on a local and on an international basis. The ensuring of that is a national duty and a primary priority of the government”, directly connecting the Revolutionary Struggle’s actions with the destabilizing role they can play. The same thing happened the previous April with the attack to Mario Draghi’s, the Central European banker’s department, to the Supervision Department of the Bank of Greece, where the office of the representative of the IMF in Greece was also accommodated.

This morning, the 17th of October 2014, we placed a banner in solidarity with comrade and fighter Nikos Maziotis. He is one of the few uncompromising fighters and people who have decided to devote their life to the struggle for freedom, and in this fight do not think of their own safety but assume the risk of choosing this path.

Nikos stands out as an example not only Greece, that is affected by the capitalist and brutal measures of austerity and class war – where on one side are states, rich domestic and foreign capital owners, with all financial means, military resources and logistics, and on the other unarmed people who are impoverished and vanish under the heel of fascist capitalists, an unjust war in which the victims were always on the side of the oppressed – but also in the whole Europe and the world, where this kind of open combat against the system is missing or has a milder form…

Nikos shows that today in debt-ridden Greece, as well as in other countries that are under EU capitalism, the poor not only pay the debt to banks, but also pay the price with their blood and skin. Recall that in Greece there is increase in suicide rate because people are unable to pay their debt to the banks – e.g. the case of the pensioner who killed himself in front of the Greek parliament in 2012 – what sparked riots and protests in Greece. The percentage of people who go on hunger strike claiming their rights is growing, including those in prison.

Nikos is behind bars, but his free spirit remains unshaken, and he now addresses his fellow citizens by phone and his message will be conveyed live at a building in the Polytechnic School (after another letter he wrote from prison in honour of Ulrike Meinhof’s birthday).

Solidarity with Nikos Maziotis and all political prisoners who stood in open conflict with the system and its inhumane “values”.

Friends from Bosnia and Herzegovina, Prijedor
_

Note by Contra Info: This evening (17/10) the comrade was hindered from making the scheduled phone call from Diavata prison. The official excuse for not permitting him to intervene in the discussion event was that the telephone system in that prison wing suddenly broke down [see also 18/10 update]. The event will take place again on Friday the 31st of October 2014 in the Athens Polytechnic School.

Members of the TUHAD-DER (Solidarity Association of Prisoners’ Families) Amed Branch gathered outside the Diyarbakır D Type Prison where they made a statement to the press declaring support to the hunger strike launched by Kurdish political prisoners in Turkish jails in solidarity with the Kobanê resistance against ISIS gangs.

The banner women carried read: “We salute the Kobanê resistance of PKK and PAJK prisoners.”

Recalling that some 5 thousand Kurdish prisoners in Turkish jails have launched a hunger strike on 15 September, Demirkıran said they, as families of prisoners, supported this strike which has been initiated to urge the government to abandon its policies on Rojava and to open an aid corridor into Kobanê.

“The demands highlighted by prisoners on hunger strike are our demands too”, Demirkıran added.