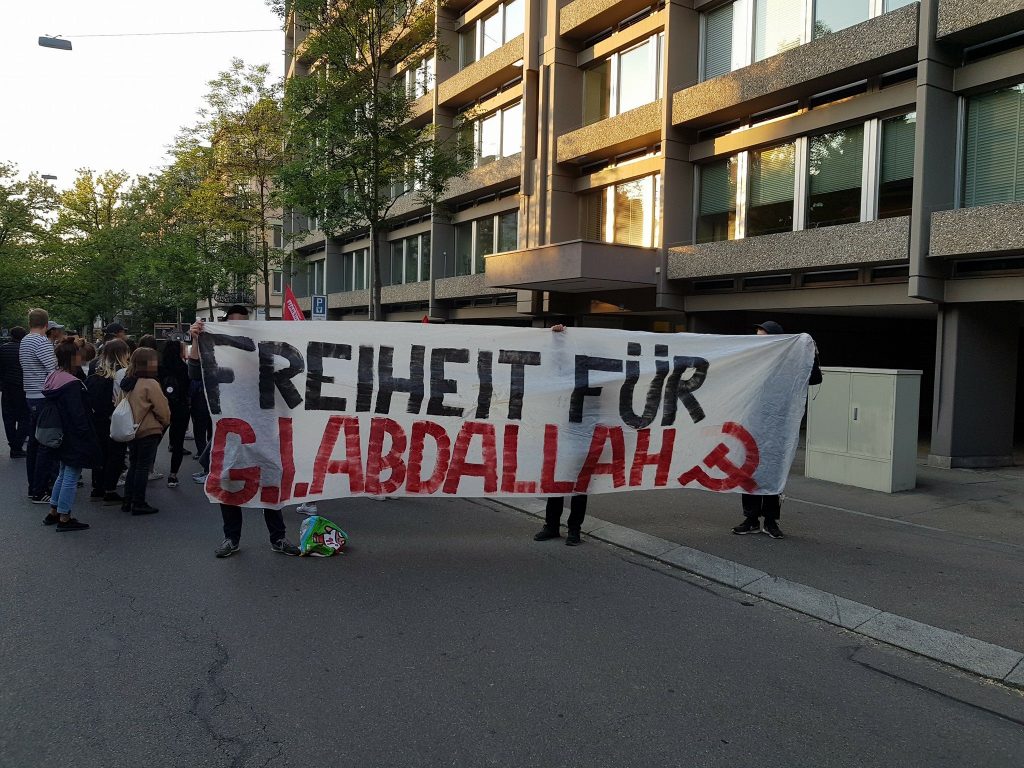 Palestinian Prisoners’ Day is a day of challenge and confrontation, emphasizing the issue of prisoners

On the occasion of Palestinian Prisoners’ Day, we salute every prisoner, the heroes and heroines of the battles of will and steadfastness, to every flower and cub, to the sick prisoners, administrative detainees and imprisoned leaders, led by the imprisoned General Secretary, Comrade Ahmad Sa’adat, Marwan Barghouthi, Hassan Salameh, Wajdi Jawdat, Anas Jaradat, Bassam Kandaji and the long line of leaders who represent the national struggle and the prisoners’ cause.

On this occasion, we make a particular salute to the martyrs of the prisoners movement and to all of those engaged in confrontation and the struggle for victory. We are firmly committed to see each battle of confrontation with the Prison Service and its instruments of repression and intelligence agencies as a collective battle. Every action initiated by any faction is all of our battle.

We also congratulate the longest-serving woman prisoner, Lena Jarbouni, on this occasion of her freedom after 15 years in Israeli jails.

In this context, we affirm that we stand hand in hand and shoulder to shoulder in any struggle waged by the prisoners, and we consider the decision to engage in the battle of dignity and honor against the jailer, beginning on Monday, April 17, Palestinian Prisoners’ Day 2017, to be one which we support and which we are part of. This comes in two ways, both through the decisions and guidelines for the comrades to engage in the battle, and through approving a program of support for the strike in all prisons and among our comrades outside.

In this context of high appreciation and support for this battle and all the heroic prisoners who will engage in it, we affirm our continued struggle for the unity of the prisoners’ movement and the escalation of confrontation against the prison administration.

Thus, we call on all the Palestinian people and their supporters and friends around the world to stand side by side with the prisoners in their continuing battles inside the prisons, escalating the mass movement to support the battle of wills, challenge and confrontation, and to once again reaffirm the centrality of the cause of the prisoners.

We also call upon all human rights, humanitarian and media institutions to support our prisoners in order to develop a unified national program at all levels for more effective results.

We call upon the leaders of the Palestinian people to make unremitting efforts to uphold their responsibility for the prisoners and the martyrs and do everything possible to defend them and support their steadfastness until victory in the ongoing battles against the prison service, through all forms of action for their liberation.

On this occasion, we urge all to close ranks in the field of national unity and urge our Front, all of the national and Islamic forces and factions and the masses of our people to devote their efforts and time in service of the cause of the prisoners.

We urge all actions and intensified work in the Palestinian, Arab and international arenas, everyhere in the world in support of the prisoners’ cause.

Popular Front for the Liberation of Palestine
Prison Branch
April 16, 2017 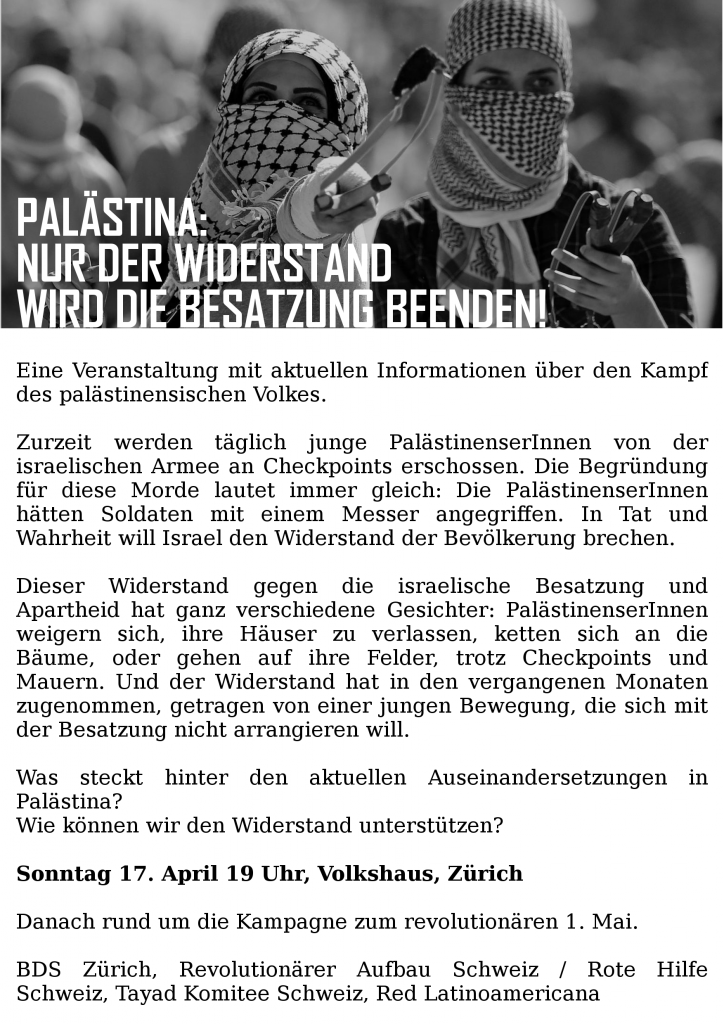 The Popular Front for the Liberation of Palestine holds the Israeli occupation state fully responsible for the life of the imprisoned struggler, brother Muhammad Allan, who today faces death, jailed and hospitalized after 60 days of hunger strike. The Front urges action and mobilization by all friends of Palestine and by our Palestinian people, everywhere in the world, demanding his immediate freedom.

In a statement released today, Comrade Khaled Barakat, coordinator of the International Campaign to Free Ahmad Sa’adat, said that “we hold Israel fully accountable for the life of Muhammad Allan, the heroic imprisoned Palestinian struggler. Israel is responsible for his life and must bear the consequences if he dies.”

“Muhammad Allan, if he dies, will not be the first Palestinian executed by Israel within its dungeons, through torture, denial of medical care or forced feeding. Four Palestinian prisoners – Abdul Qader Abul Fahem, Ali al-Jaabari, Rasim Halawa, and Ishaq Maragha – were killed by force-feeding – with which Allan is threatened today, even as he lies in a coma,” Barakat said.

“Hundreds of Palestinians have been killed and had their lives taken inside Israeli prisons over decades of occupation, but he would be the first Palestinian prisoner to die on hunger strike. The liberation martyrs whose lives have ben taken by colonizers as they hunger strike for justice and freedom – like Bobby Sands and his 9 Irish comrades in British prison – are immortal symbols of struggle that belong to global movements for justice and liberation,” said Barakat.

“The case of Muhammad Allan illustrates that Palestinians will continue to struggle by all means until they defeat administrative detention. We know that this is a long and brutal battle, as it is a system that serves the interests of the occupation and that they are not willing to relinquish. It is a system that was inherited from the era of British colonialism in Palestine, which means that we hold Britain responsible for Muhammad Allan and for every Palestinian who is and has been held in administrative detention,” Barakat said.

“Brother Muhammad Allan demonstrates true Palestinian heroism and courage,” Barakat said. “He follows in the steps of many other Palestinian prisoners, using his last resource to confront the occupation, even through hunger. We are witnessing the birth of new young Palestinian leaders in the arena of confrontation with the occupation: Lina Khattab, Khader Adnan, Muhammad Allan. This is the case and experience of every colonized and oppressed people who rise up for their liberation.”

“Finally, Israel must bear the consequences and pay for its crimes. Israel has enjoyed global impunity thanks to the support of the United States and fellow imperial powers. This must come to an end through the efforts of Palestinian resistance and revolution, supported by the people of the world,” Barakat said. “Otherwise, the business of occupation,killing and torture will continue as business as usual.”

“There is a need to build the international campaign against administrative detention. This should be a priority and part of the efforts of the international movement to boycott Israel, as the prisoners emphasized in their latest statement,” Barakat said. “We need to hear the voices of the world demanding freedom for Muhammad Allan, demanding freedom for our imprisoned leaders.”

The prison branch of the Popular Front for the Liberation of Palestine, headed by national leader Ahmad Sa’adat, will launch an open hunger strike on Tuesday [11 August], following a stalemate in the negotiations with the Prison administration, brought about by the Prison Service’s intransigence in response to the just demands of the prisoners. In addition, today a military order was issued extending the security prohibition against leader Sa’adat, denying him family visits for an additional three months.

The prison branch confirmed that the Front’s prisoners, led by Sa’adat, have decided to fight a long and difficult battle with the occupation which is not conditioned by any covenants or undertakings, after exhausting all options in order to impel the occupier to respond to the demands of the prisoners.

The PFLP prisoners called on the masses of our people, the Arab and Muslim communities and countries, and the forces of justice and freedom in the world to provide the widest support and solidarity to the struggle of the prisoners’ national movement in the battles of confrontation and steadfastness they are waging around the clock against the prison and intelligence officials of the occupation. The breadth and depth of solidarity gives prisoners inspiration to continue the struggle until their rights are achieved in full.

The imprisoned comrades will strike to demand an end to the prohibitions on family visits for Palestinian prisoners including the orders against Comrade Ahmad Sa’adat; and to demand medical care for sick prisoners, an end to the policy of administrative detention, improvements in conditions inside the prisons and a ban on invasions and raids by Zionist special units against the prisoners.